This article talks about the traditions of April in Romania. Many of them related to agricultural life or religious one. 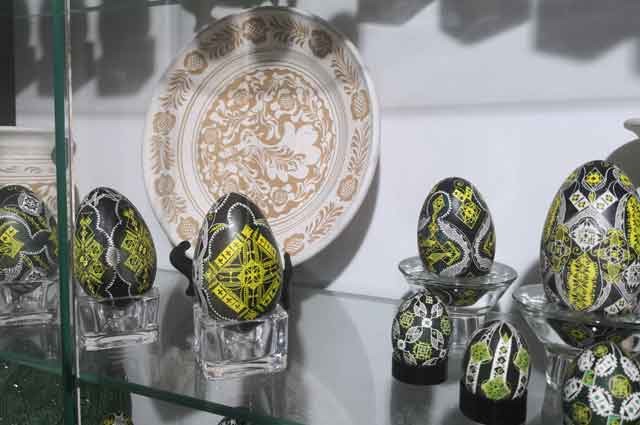 Fool's day it is not considered officially a holiday but certainly is a happy day and full of enthusiasm. In Romania, this custom appeared only in the XIX century.
According to tradition, the tricks have to be done until noon. Doing it afternoon is bad luck for the one who is doing it.
The fooled Pearson has to be tolerant with the tricky one and to receive the farce with amusement. Also, he is not allowed to upset if he doesn`t want to be tricked all year. The Romanians say that if you don`t trick anybody on April fools all the year until the next April you will be the tricked one.
What it`s good and what`s bad on Fools Day.
It is not good to make marriages, because the groom will be in the bride's slippers. Also is a fertility day. If a male is tricked by a female he should consider a favor from his destiny. It says that the faith reserved for both of them marriage or a good relationship.
More than that, the children born on fools day are considered to be lucky.

THE EASTER CELEBRATION IN BUCOVINA
The preparations fever for Easter, starts many days before, during Lent and one of the most famous occupations of the Romanians from here is the egg painting, a custom which is done in other parts of the country but here, is brought to the art level.
The painting of an egg is a very scrupulous thing that request a lot of patience, talent, and taste. The technique is very old and for doing it are necessary, bee wax and many bright colors, which in the end will make a great color.
As the Resurrection is feeling much closer, the housewives hurry the preparations for the first day of Easter when the family after at least 7 days of Lent will eat from the meals given by God. In the Holy Night at the church came the entire Christian community and the Resurrection service will take on until the morning.

Saint George
Saint George is one of the most venerated saints from the orthodox calendar, celebrated every year on April 23-rd. It is a god of vegetation, protector of cattle and sheep but of the green nature too.
In the folkloric tradition, it is the second pillar from the orthodox calendar, together with Saint Dumitru. In between the two saints exists cosmic bondage. It says that will rain on this day of the year will be right for agriculture. The old people say that when the first frogs start to sing Saint George takes the key from Saint Dumitru and opens the way of nature to rebirth. The people adorn the pillars from their gates with green willow branches to protect the house from evil and enemies. In the past, this celebration was with dances and parties for 3 days.

Traditions of Saint George Day
In Saint George Eve, the marriageable girls believe they can see the weird in a bowl filled with water at midnight. Another tradition known by the unmarried boys is the one that requests the start of a big fire to purify the space and keep the witches away.
In the morning of Saint George, the people wash their faces and drink red wine to be healthy all year long. Also in the same morning, the girls are going stealthily in the forest to pick mandrake and hart`s tongue fern. Those plants are put in the attic or under the eaves believing that will bring rich precedents. On this day, nobody sleep because otherwise will be sleepy all year.

Deniile ( evening service during passion week )
Deniile is one of the most profound, beautiful, and uplifting Christian services. Appeared with Christianity and begin with Palm Sunday until Friday night when it singing the funeral of the Lord.
The first days from the Holy Week, Monday and Tuesday are preparing each believer to understand the sense of the coming of Christ in the world of suffering and His death, the one of winning death and sin by His sacrifice.

The Denii Services
In those days, at denii we recall parables about the kingdom of Heaven, together with the psalms and other texts about repent. During this time, the priests are sharing with the believers knowledge about regrets for their sins and talk about belief, forgiveness, pity, good facts, patience, and prayer.

The Big Denia and The Little Denia
The most important Denias are the ones from Thursday and Friday night. Are known as Big Denia and Little Denia.
On Thursday night Denia are read the 12 Gospels of the suffers and the removal of the Holy Cross in the middle of the church.
Friday night is the mourning day of Christianity because the Saviour was crucified. So, we don`t have religious service because the liturgy itself means sacrifice and could not be brought two sacrifices on the same day. That is why only in the evening is the service of  Burial Denia. First of all, youngers and elders are passing under the table filled with flowers, a table which symbolizes the catafalque of the Lord. On it is a table cloth painted with the burial of Christ and the Gospel together with the Cross. Then, the priests, the coir, and the believers sing the Burial of the Lord

Palm Sunday
Mark the beginning of thee Holy Week and of the last week of Lent.
Palm Sunday, means the Entrance of the Lord in Jerusalem and it is celebrated on a Sunday called Palm Sunday. It is one of the most important celebrations of the Orthodox Church and opens the week of preparations for Easter.
Traditions in Plam Sunday. On this day, the people are going to the church with willow branches to meet Jesus Christ. They put the holy branches in the trees to help it fruit. They do the same with the hives to protect the bees. The holly branches are used for the cuttles and their health. The willow buds are burned to spread the clouds and protect the house and family. These holy branches are kept over the year being good for heal diseases. Another custom says that you have to wash your hand only with holy water otherwise you will be white on your hair as the flowers of the trees. The elders said that the one who eucharist himself on this day had good chances to fulfill any desire.
This day is ending the Martisor period so all the women and girls who wore the Martisor are connecting it between the branches of a blossomed tree. The tradition says that how it is the weather in this day, the same will be on the first easter day.

Easter Traditions in Maramures.
Maramures is the place when the Easter Traditions are unchanged by centuries. The people avoided that the forgotten to set over their heritages.
The Easter traditions are simple. The believers are split their time between work and prayer. Sometimes they work and pray at the same time as any other Romanian.
In the Holy Week, the churches are full of believers which let them work away to listen to the Denia and to clean their soul before the Resurrection of the Lord. According to tradition is not good to wear colored clothes in the Holy week and the red color is forbidden. Nobody can use new clothes, the clothes have to be modest, somehow mourning.
Another specific tradition for this area is to offer charity for the souls of the deads. On Holy Thursday, the people are giving eggs to the poor people and make a big fire in front of their house to warm the souls of the dead people.
In Holy, Friday is a black feast. We do not eat and drink from the morning until the sunset. On this day is forbidden to dance.
From Holy Saturday to Easter Sunday the Christians go to the church around 23;30 to participate in the religious service and the Ressurection of our Lord Jesus Christ. They take the light give it to them by the priest and share it at home and to the graves of their deads to have light all the year.
On Easter Sunday they put into a kettle cold water, a red egg, a silver coin and they wash their face to this water to be red in their chicks ( healthy) as the egg and to have richness all year long. Everybody has to wear new clothes.

The feast of Easter has its customs and traditions, depending on the culture and civilization of each nation or ethnic community.
Preparation for Easter begins with Roman Catholics with the fast of Easter, which is ordained for the purification of the soul through prayer, confession, and communion with the Holy Sacraments.
Every few years, Catholic and Orthodox Easter are celebrated together. The Catholic Church and the Orthodox Church calculate the date of the Resurrection of Jesus according to two different calendars. The date of Easter differs from 1582, when the Roman Catholic church passed to the Gregorian calendar, correct from a scientific point of view, and the Orthodox church remained according to the Julian calendar, erroneous.
Easter is accompanied by a lot of customs and symbols, but the best known is the custom of sprinkling. The boys gathered in groups go to the girls 'house the day after Easter, where the girls' parents ask if they get wet while saying the following poem: “I was in a green forest, I saw a blue violin, which was withering. . Will you let me sprinkle it? ” The boys sprinkle the girls with perfume, after which they are rewarded with red eggs, drink, and cakes.
In other areas of Transylvania, on Saturday, the boys decorate the fir trees with colored ribbons, and at dusk, the young people sneak into the courtyards of the bridesmaids and hang them fir trees at the gate.

Lazar's Saturday or Sabbath of the Dead.

Lazarus' Saturday it is also called the Death of Flowers or Saturday of the Dead. On this feast, the women make Lazarus pies and give them to the poor. Also on this day, women are not allowed to spin so that the dead, who are waiting at the gates of Heaven, will not return to earth.
The elders of the south say that on this day they go with "Vaiul". The valley was originally a religious hymn, in which the girls were adorned with willow and sang from door to door, and the faithful gave them eggs as a thank you.
On the Saturday before the Flowers, "Pricesne" is sung, which tells about the death and resurrection of Lazarus, the resurrection that announced that of our Savior, Jesus Christ. In the north, there is talk about how Lazarus died craving some pies that his mother could not make, because she twisted, from there, the tradition with Lazarus pies.