The Elders of Winter.

We are talk this time about the traditions of February who are following the religious celebrations of the month. 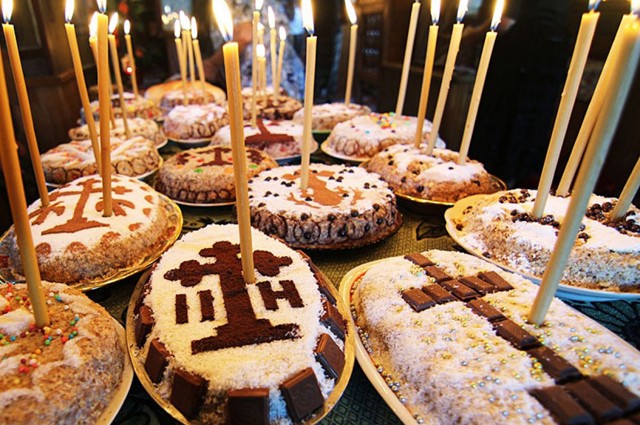 Meeting of the Lord, take place on Febr. 2-nd and it is known by the people as Stretenie. In Romanian tradition, Stretenia it was known as a saint woman, which helped the poor people. The day of February, 2-nd was the celebration of cows and old women.
Traditions of the day of Meeting of the Lord.
Is good that the women go with their children to the church. When the children have 40 days old after birth his mother takes him to the church. In the name of the family, she offers him to God and worships at the altar.
The believers honor the Icone of Mother of God for prosperity and health that day. This tradition is called “Taming of the hardened hearts” or “Simon Prophecy”.
On February 2-nd is celebrated also “The Bears Day”. The tradition says that the fathers, put some bear lard on the skin of their children believing that the power of the bear pass over the children and he will become strong and healthy like a bear.
On this day the bear came out from his shelter and if he is seen his shadow it will take some time until the spring.
The elders said that the changing of the weather was related to the unusual behavior of the bear, called “Al Mare” ( The biggest one) or “Martin” because we call the bear Mos Martin ( the Old Martin)
To gain the sympathy of the bear, the people put on the paths, honey pots, and meat. The power of this animal is transmitted to the peoples especially to the children.
On the same day too take place “Tarcolitul Viilor” a ritual made by the grape growers.
In Transylvania, the man is going to cut and arrange the vineyards. From the small branches of the grapes plant they put it on their hats and make a party where are drinking a bottle of old wine.

The Elders of Winter,
In the Orthodox Christian calendar on February 18, we mention those who passed to the Lord. It is known in popular tradition as "Saturday of the Dead" or "Winter Estates", and is celebrated before the Sunday of the Fearful Judgment. On this day, those who did not have the funeral services are mentioned in the church.
Traditions on the Sabbath of the Dead:
• In some areas, people say that the souls of the dead come to earth, believers give cooked food as alms. The deceased come on this day and feed on the smell or steam of the stews in such a way as to reach them for a whole year. According to the custom, the cage, rolls, meatballs, sarmale, pie, fruit, wine, and lighted candles are given as alms.
• At the graves of relatives, it is mandatory to light at least two candles, which have the role of warming the souls of the dead.
The elders say that the day of the winter Moors was also known as the Land of the Fathers and the Feast of the Fathers. It is the only day to eat meatballs or colds. If they remained, they were thrown away the next day, in order to prevent the appearance of colds during the summer.
• No work is done on February 18th. Women who break this commandment are punished to tremble like a beggar and return their alms. This day must also be observed to avoid madness.

Dragobete, is a magical personification of love, is the god of youth and joy. Endowed with warm feelings, Romanians have a day in which they celebrate their love in Romanian clothes and speeches. It is celebrated on February 24 and coincides from the point of view of the Orthodox calendar with the feast "Finding the head of Saint John the Baptist".
Dragobete's day is also known as "Spring Head" or "Bird's Fiancé" being associated with spring, a season of hope and rebirth. On this day spring begins, it is said that the bears come out of hibernation and the birds start the mating rituals. It also has a rich and interesting symbolism. Dragobete represents in essence both the beginning and the end. The beginning of spring and the revival of nature and the end of worldly delights because the Holy Lent of Easter begins.
In Romanian mythology, it seems that Dragobete was the son of Baba Dochia, a handsome young man, loving and kind-hearted, a God of love, who seduced women.
Dragobete traditions:
• On the morning of Dragobete, the young women gathered fresh snow, melted it, and washed it with water obtained on their heads, saying that they would have beautiful hair.
Everywhere there was a saying: "Dragobetele kisses girls!"
• If the weather was beautiful, girls and boys dressed in festive clothes and walked together through the forest singing, chirping, and picking the first spring flowers. The girls gathered the snowdrops and the violins they put on the icon, saying that they had healing powers.
Tradition says that more girls and boys gathered at a house to "make Dragobetele". Young people believed that this way they would have loved all year round. This meeting sometimes turns into a real party, with food and drink. The elders of the village also say that in other areas, the young people gathered at the edge of the village and started towards the forest where they made choirs, kissed, and hugged. It is said that whoever participates in this holiday will be protected from diseases all year round. Dragobete also helps households to have a rich and healthy year.
• On Dragobete Day, the house is cleaned to have a rich year.
• If it rains on this day, it will be a beautiful spring.
• No animals or birds are slaughtered and no fieldwork is done.
• If you hear the puppet singing you will be hardworking and good all year round.