May traditions in Romania

The may traditions are part of the every year customs of the Romanians, As usual, their majority is connected with the Agricole season and with the religious celebration. 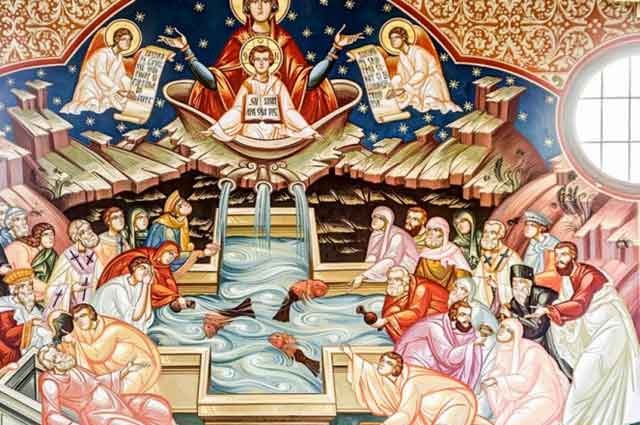 The Source of Tampering

Every year, after the first Friday after Easter, in the Week Lightened, The Orthodox Church, celebrates The Source of Tampering, a celebration feast to the Mother of God.
This celebration, remember us about miracles made by the Virgin Mary, the day when all the waters are sanctified, and the Holly Water have more than anything the gift of healing and cleaning the heart of the Christians.
This celebration is kept for purifying the Christians' souls, for the fruit water, and the blessing of the house. It is not good for men to work in the field because they may become ill.
According to tradition, the believers are going in the morning of the day to the church to participate in the water sanctification service.
In Wallachia, it is still preserved the tradition that, to this day, the priest to go to the water spring to sanctified it to not let them dry or be a house of evil.

The year 2013 was declared by His Holiness, Patriarch Daniel, like being the homage year of the Saint Emperors, Constantin, and Hellen. Are fulfilling 1700 years from the Edict of religious tolerance from Milan, through which the burdens of the religious persecutions are stopped after almost 300 years.
The Saint Emperors Constantin and his mother Helen are known as the ones who given the freedom to Christianity. They were not only defenders of the religion but also good Christians, defenders of human dignity. The emperor Constantin given orders and imperial decrees modifying the pagan legislation. He forbid the crucifixion, crush of the feet, burning with the red iron. At the same time, he modifies the laws making more difficult the divorce and punishing adultery. He helped the people in need, the sick people, the old man, and the widows.
In the folkloric calendar de day of may 21-st is known as the celebration of the forest birds, called Constantin Graur or The Constantin of the chicken. The old man said that on this day, the birds teach their babies how to fly.
Are many traditions and customs in Constantin and Helena's day. Many of them are referral to the coming summer. To avoid the damages brought by the birds the peasants do not work this day.
In one area is the last day when you can cultivate corn, oats, and millet. It says that everything planted after this day will dry.
Also on this day, the Shepards decided who will be their chief, where will put the sheepfolds, and who will guard it.
The women are given incense and aghast to keep away the evil, and the man makes a big fire and stays around it.

St John, was the son of Zebedee and Salome, being fisherman and original from Betsaida. Sf John Evangelist was the youngest among the 12 apostles. John was one of the closest apostles of Iisus.
Is the apostle which Iisus ask to take care of  His mother. After the resurrection, John was the first one who searches the empty grave.