What is baptism? Baptism is the sacrament in which, through triple immersion in water, in the name of the Holy Trinity, the one who is baptized is cleansed from ancestral sin and from all sins committed up to baptism, is born to a new spiritual life and is He becomes a member of the mysterious body of the Lord, of the Church of Christ. 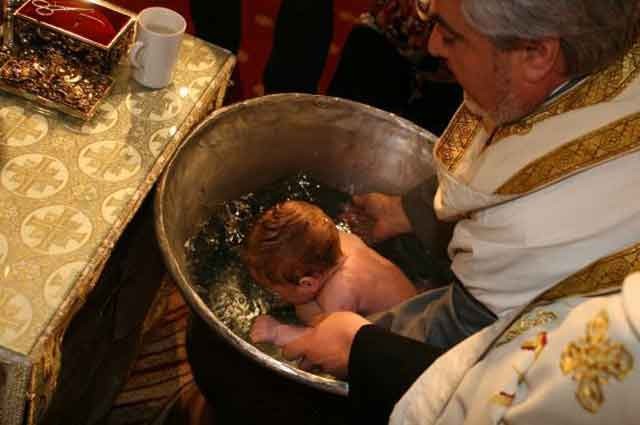 The baptism of water and the Spirit has its origin in the Old Testament prophecies, because our Lord Jesus Christ came to fulfill everything prophesied in the Law and in the prophets (Matthew 5:17) - source: www.cleopasihastria.wordpress.com

Romanian customs and traditions - at the baptism of the child

What should parents buy and have at baptism?
a) Have the child's birth certificate.
b) To bring a symbolic gift to the godparents
c) For the next day she has to prepare a towel and soap for the mother to wash her godmother after the bath and another towel for the one she gives the baby, which means "midwife".
d) Have scissors plus a box to put the hair that the father will cut at the christening.
e) Buy sweets to serve in the church
f) Once the bath is finished, stop some of the tubs (flower petals) that you keep in a box next to the baptism hairs.
g) Having bought a row of clothes, with which the baby will be dressed before the christening.

What should the child's godparents do?
a) Buy the child a complete set of clothes, with which he will dress after baptism (white cloth, ribbon, white towel and soap for the priest, clothes and shoes for the baby, bottle for myrrh).
b) To buy the baptismal candle
c) Buy a bottle of communion wine and a bottle of oil.
d) Pay Church taxes
e) To buy a baby gift
f) Buy an icon that will be consecrated by the priest, and that he will give to the child.

What are the stages of baptism?
The specific baptismal service consists of two parts: the deliverance service and the baptismal service.
The first part of the Holy Baptism service is made up of renunciations or exorcisms, when the one who comes to be baptized looks towards the west and declares three times, personally or through his godfather, that he renounces satan, all his things, to all your things. servants, for all his service and all his pride. Then the one who is baptized turns to the east and again declares, also three times, personally or through the godfather, if he is a baby, that he is united to Christ, pronouncing the Creed three times.
The second part of Baptism is formed by the sanctification of the water, that is, the performance of the aghiasma for baptism and the triple pouring of consecrated oil into the baptismal font. Here the most important part of Baptism takes place, it is formed by the triple immersion of the baby in the baptismal font, saying: The servant of God (name) is baptized in the name of the Father, Amen; and of the Son, Amen; and of the Holy Spirit, Amen.
Then, the newly baptized are wrapped in a pure white cloth, popularly called chrism, which comes from Christ. After some other prayers, the priest anoints the body of the newly-baptized with the Holy and Great Anointing, which is the second Sacrament of the Church, saying these words: "The seal of the grace of the Holy Spirit."
Then he cuts the hair from his head in the image of the Cross, as a sign that he has renounced the old man and has dressed in the new one, dresses him and, taking him to the Holy Altar, shares him with the Body and Blood of Christ. Thus, the newly baptized receives three Holy Sacraments at the same time: Baptism, Anointing and Holy Communion.

Post-baptism party
After the service, the parents go to the party.
That's where the parents' money and gifts are delivered, after which the party can begin.
That's when the good fairies will come.
The belief in good fairies, in their power to shape the destiny of each man, has spread and continues to be rooted within the Romanian people, inherited from the Romans.
There are 3 so-called fairies that come on nights without a husband (3, 5, 7) from the first week of the newborn's life and they stay with their destiny. It is said that in ancient times, these good fairies were seen and heard cursing by midwives, who these days cared for newborns, their mothers and even the fathers of the child. Unfortunately, because midwives have revealed this secret, they no longer have this gift today.

If you do not opt ​​for a company to help you organize the baptism party, you will need to prepare in advance:
- to reserve the party room
- choose the menu and the cake
- choose the decor of the room and tables
- choose band / DJ and photographer
- choose invitations for baptism
- choose the baptismal testimonies

The next day's bath
The day after the baptism, the godparents go to the bathroom. From now on, the godparents have the obligation to take an interest in the well-being of the child and visit him as often as possible. They are now your spiritual parents.

The next day's bath. 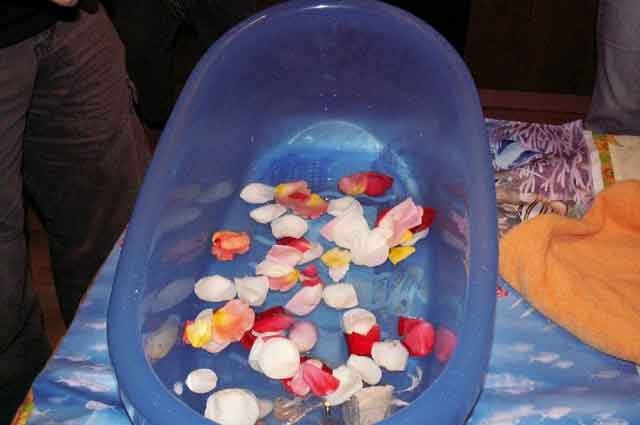 Cutting the moth
At the age of one, the little one follows the cutting of the moth for boys or the breaking of the cake for girls. The tradition is not practiced in many areas, but it is something like this: up to 1 year old the child's hair is not cut. Only then, the godparents come with gifts and dress the little one in new clothes. He is then placed on a chair, a strand of hair is tied with a bow and the godparents cut the hair. It is also customary for the strand to be glued to a silver coin with wax. For girls, break a cake above the head and then cut the strand. After cutting the moth, a tray with various objects is placed in front of the child, from which he will choose 3. These objects, as usual, are said to predict the future of the little one.

The bath the day after baptism is according to Christian tradition, the day after the child was baptized. It is also popularly called bathing or removing myrrh. The day after the baptism, the godparents go to bathe the new Christian baby. It is a ritual bath, for "washing the ointment", in which, traditionally, only women participate: mother, midwife, godmother, and other family members.

Here is what the godparents must have and do ...

1. The godmother must have the following: towel, baby oil, and shampoo, suit, baby carrier, pillow, toys, diapers. After washing it, you have to call it by name. After the baptism and until the godfather washes it, no one is allowed to kiss the child (it is said that he "takes the ointment") or to call his name.
2. He shall anoint him with oil (the anointing oil of the baptism) everywhere, that is, on the wrists, heels, and on the whole body; it is said that if the godfather anoints him well, the child will have a velvety skin like silk.
3. For the boy, the baptismal candle must be lit - the bandage is placed in the tub, and after it is finished, the water is thrown to a tree and the bandage is dried in the mirror.
4. Enchant the child before putting him in the bath with the basil twig: around the eyes "to see good and beautiful things",
around the ears "to hear only the teachings and to listen to them",
"to speak wise words and to know how to respect those around him",
on the gloves "to be diligent and skillful",
on his chest "to be loving and with a big soul",
on the head "to be smart and enlightened",
on his feet "to take him where he should and to always bring him home, next to his loved ones"

At the myrrh bath put in water: rose petals, linden flowers
nice smelling oils
a penny of gold or silver
a flake, to be as light as a flake
a drop of honey or sugar to be sweet
rice for wealth, wheat to be honest
a wedding ring
an egg to be healthy and full like an egg (which must remain whole, the child's mother will put it in the bath water from the 2nd day)
church oil
sterilized pennies before
pepper
sweet milk
basil to make the baby beautiful
dill to be as pleasant as dill in dishes
mint and Romanian to grow easily and be healthy
poppy seeds to sleep well
hemp seeds to grow fast
holy water to be the pure child like this
seeds
salt
wheat to be honest
perfume

Bathing habits
• Books are placed under the tub to be the "studious" child.
• At the end of the bath, put it under the ears, under the armpits, on the feet with a stick with a drop of perfume - to smell good.

The midwife, after - according to tradition - taking out the money, goes and puts water from the child's bath at the root of an apple or hair to raise the child as beautiful and healthy as that tree. Then the midwife sits on her back and the women surround her 3 times, dancing and chirping. After all this, the midwife must jump over the bucket, singing and provoking her nieces who want a child like this:

Come on, jump over the bucket, you have a face too
But jump higher, you also have a son

In the end, she takes the child and gives it to the godparents, who put money on her chest, after which she gives it to the mother who honors her with a glass of brandy, a symbol that is met once again when the midwife has the duty to organize a "small party "with his nieces in honor of the newborn.