The most known story or legend about Romania is Dracula. The novel and later the movie made transformed Vlad Dracula (Vlad the Impaler) in one of the most famous characters in the World. We are inviting you to discover the myth and true about the legend of Dracula, while you’ll be part of our Dracula tour in Transylvania. Vlad Dracula was a Prince of Wallachia – the southern region of Romania, but he was born in Transylvania and spend many years in that region. Therefore we’ll visit these two important provinces, the most important castles, old towns, his birthplace as his burial place too.

Other services not specified on the itinerary; Photo or video fees inside museums (required in some places); Personal expenses.

Other services not specified on the itinerary; Photo or video fees inside museums (required in some places); Personal expenses. 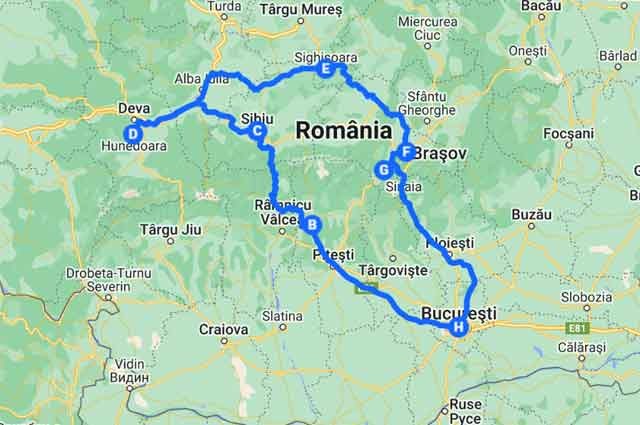 Meet our tour guide, in the morning at your hotel in Bucharest or at the airport for arrivals in the morning. Note: on request we can include extra nights and travel services in Bucharest.
Bucharest region and go to Curtea de Arges, the former second capital of Wallachia. The strongholds rebuilt in the 14th century. Visit the Princely Court and the History museum. See the Episcopal Church (the monastery) which is a recreation of the original built in 1512 -1517 by Prince Neagoe Basarab. It became famous due the legend of Manole, the mason.
Then optional visit the Poienari Castle. Standing on a cliff but know in ruins this is known as the real castle of Dracula (Vlad Tepes). To get to the top you must climb up its 1400 steps (takes approx. 1 hour). The path goes through the forest and it is an increase danger of wild bears. For this reason, the authorities may decide special restrictions or conditions for the visit.
We'll continue our route towards Transylvania. A very scenic route which will pass the Carpathians mountains through the beautiful Olt River Valley.
In the evening we’ll arrive at Sibiu, a charming medieval town from Transylvania. We’ll stay overnight in a 4 stars hotel, located in the Old Town (Ramada, Forum Continental, etc)

Optional services in Bucharest before / after the tour

Breakfast. Walking tour of the Sibiu’s Old Town. Sibiu is one of the most important fortified towns in Transylvania.. The city is reminiscent of old European cities such as Nuremburg and it was founded in 1190 and grew to be the chief city of the Transylvanian Saxons. This amazing town, with the "Old Town" (The Big Square, the Small Square, the Ursuline Church, The staircase Tower, the Liar’s Bridge, Orthodox Cathedral, Lutheran Cathedral, Catholic Cathedral, fortified wall and towers) is a gorgeous place to see.
Next stop will be at Hunedoara to visit the famous Corvin’s Castle, the residence of the brave Transylvanian Governor – John Hunyad (Iancu de Hunedoara). The castle built in XV century is the biggest medieval castle from Romania and it’s also considered one of the most haunted places from Europe.
In the afternoon we’ll drive to Sighisoara, the Pearl of Transylvania. The route goes through charming old villages, little churches and fortresses. These are samples of Saxon / German heritages in Transylvania.
Overnight at Sighisoara Hotel*** or similar, located in the medieval town.

In the morning we’ll visit the medieval citadel of Sighisoara – the birthplace of Vlad Dracula. The old medieval city is included in UNESCO's Word Heritages List due the well preserved Renaissance style architecture. The colorful houses, narrow streets and medieval defensive buildings will give you the feeling of a trip in the past Middle Age times. We’ll visit the Clock Tower, Sighisoara’s landmark, the church on the Hill, Tinsmiths’ Tower, Covered Stair, House of Dracula, etc.
We’ll leave Sighisoara and we’ll continue our drive through the scenic villages, Transylvanian green rolling hills. We’ll see on the route different fortified churches and fortifications.
We’ll stop in Viscri, one of the most known and well preserved village. People from here are continue their old way of life, their traditions and crafts. Have a walk on the village streets, visit the Viscri fortified church, one of the oldest in Transylvania and have a look to the small craftsmen shops.
Another interesting stop will be at Rupea fortress, built in 14th century and which a very important defensive and administrative role in this region. The fortress impress its visitors with the strong three lines of fortified walls and its top hill location. Once you’ll be on the upper part of the fortress you can have a 360 degrees view.
The last stop of the day we’ll be at Feldioara Fortress (Marienburg). The initial fortress was built in 13th century to be the headquarter of the Teutonic Knights in Transylvana. Later, in 14-16th century was transformed by the locals in a defensive structure to protect their community.
We’ll end the day in Brasov another amazing old town from Romania.
Overnight at Bella Muzica Hotel*** or similar.

We’ll start the day with a walking tour of the medieval center of Brasov. The city of Brasov is one of the oldest in Europe, dating from 1235. During the Middle Ages, Brasov was known as a powerful fortress surrounded by high stone walls and defended by bulwarks, towers and other small fortresses. The buildings and the streets in the historical centre still preserve a medieval note. Council Square, Black Church, White and Black Towers, Weaver’s Bastion and Ecaterina’s Gate are the tour highlights. The famous Vlad Dracula spend few years of his life living and trading in Brasov. We’ll pass by the place where he lived and you’ll find interesting stories about his life in the city, his love affairs, etc.
We’ll continue to Prejmer, a village aprox 25 km far from Brasov. Here we’ll stop at Prejmer Fortified Church, one of the best preserved of its kind in Eastern Europe. The church is modeled after churches of Jerusalem, as well as built in the style of Early Gothic churches from the Rhineland. The concept of a fortified church as it is presented an Prejmer is unique in Europe and can be seen only in Transylvania.
Last stop of the day will be at the famous Bran Castle. Also called Dracula`s Castle, it is situated at the entrance in the Bran - Rucar passage. The castle got its fame from Dracula`s legend written in 1897 by Bram Stoker and later on made into a film by Francis Ford Coppola.. The first documents about the Bran Castle appeared in 1377. Along the history, the Castle had a strategic mission being the border between Transylvania and Wallachia. First it was under the rule of the King of Hungary Sigismund of Luxemburg, of the Romanian voievodes Mircea cel Batran and Vlad Tepes and later on it came under the jurisdiction of the City of Brasov. In the XX century the castle was donated to the royal family and becamed a royal residence. The museum preserve the furniture and objects from that period.

Is the last day of our Dracula tour. We’ll depart from Transylvania heading south towards Bucharest. On the route we’ll have couple stops. First one in Sinaia, a mountain resort where we’ll visit Peles Castle, former summer royal residence of the Romanian kings. It is an amazing palace with great architecture and design, impressive wooden works and decorations, stained glass windows, Venetian mirrors, etc. A highlight is the king Carol I weapons and armors collection.
Then will go to Snagov, a small village 40 km north of Bucharest, with its beautiful 16 km long lake. In the centre of the lake is an island occupied by the Snagov monastery. The present church holds the tomb of Vlad Dracula. He and his family donated money to the monastery and he built a fortification system around it. The first church was destroyed by the turks in 15th century. Visiting the tomb of Dracula is a great end of our trip and another chance to find more about his mysterious death.
Drop off at Bucharest International Airport (estimated time 2.30-3.00 PM) or at another location from Bucharest.
If you need extra services in Bucharest as accommodation, airport transfers, tours check our Optional packages mentioned above (end of day 1)

Customize your Dracula tour in Romania

If you want to find more about Dracula story, if you have more time to visit other attractions from Romania, we can design a customized tour offer for you. We’ll be happy to share with you more information and to visit other places. You just have to send us your special request using the book / request or sending us an email to office@visittransilvania.ro.

For the ones interested in this legend, our Dracula tour in Romania is the best way to clarify what is the reality and was is the myth related with the famous Vlad the Impaler. Your private tour guide will tell you the all story starting with the ancestors of Vlad, his childhood, his time spend in the Ottoman Empire, his three reigns of Wallachia, his mysterious death, etc. He will also explain to you the origins of his name and how the legend was born.
But Romania is much more than Dracula so while you’ll be in this tour of Romania, we’ll visit other very interesting places which will reveal the history of Romania. Starting from Bucharest – the Romanian capital, and the town first founded by Vlad Dracula we’ll pass through Curtea de Arges, an old early Middle Ages town connected with Vlad’s family and we’ll continue to the best medieval sites from Transylvania. Many of this sites being connected with Vlad’s life, as his birthplace, towns where he lived, castles where he passed by. Join us for a great journey on the trail of Dracula!