On the steps of Dracula

We are inviting you in a tour on the steps of Dracula, the famous prince who lived in mid 15th century and became the subject of a very popular legend. Many people are asking who really was Vlad Dracula, what he really did and what is real and what is myth from his story. If you are interested to find answers to all these questions join us for this Dracula tour in Romania. We’ll visit the sights connected with his real life as his birthplace town, the city where he lived for couple years, Bran castle – known as Dracula’s castle, his burial place and few other places in which you can discover more about Romania’s history. This is a short break Dracula tour in Transylvania, designed for those which don’t have a lot of time and just want to quickly discover Transylvania as a destination. It can be a a weekend tour or a pre cruise or post cruise tour of Romania.

Other services not specified on the itinerary; Photo or video fees inside museums (required in some places); Personal expenses

Other services not specified on the itinerary; Photo or video fees inside museums (required in some places); Personal expenses 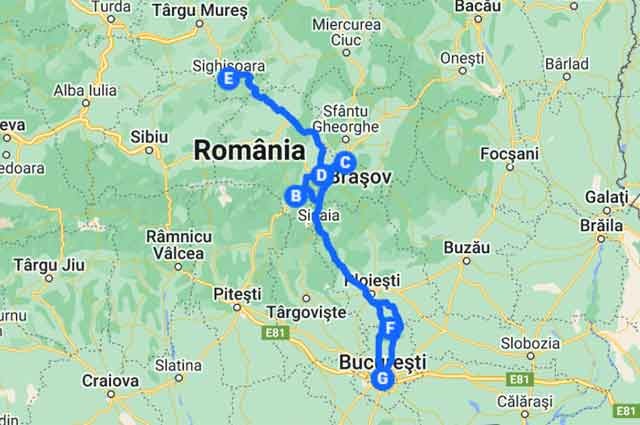 Meet our tour guide, in the morning at your hotel in Bucharest or at the airport for arrivals in the morning. Note: on request we can include extra nights and travel services in Bucharest.
We’ll start with a panoramic tour of Bucharest. Highlights are: Parliament Palace, University Square, Triumph Arch, Royal Palace, Athenaeum, Revolution Square, Kretzulescu Church, etc.
Continue to Bran and visit the famous Bran Castle, dating since 14th century. Also called Dracula`s Castle, it is situated not far from Brasov, at the entrance in the Bran - Rucar passage – the gate of Transylvania. The castle got its fame from Dracula`s legend written in 1897 by Bram Stoker and later on made into a film by Francis Ford Coppola. The castle was built to defend the entrance in Transylvania and to be a custom point, Your tour guide will tell you all details about the castle construction style, its architecture and events along the history and mostly which is the real connection between Vlad Dracula and Bran castle.
Last visit of the day will be at Prejmer fortified church (UNESCO), a unique sample for a mix between a religious and a defensive structure. Built to protect the village communities, fortified churches are characteristic for southern Transylvania.
End the day in Brasov. Accommodation at: Bella Muzica Hotel***, located in the old town, or similar.

Optional services in Bucharest before / after the tour

Breakfast. Brasov is one of the most important cities from Romania and a very powerful medieval citadel dating since 13th century. Vlad Dracula lived in this town for couple years in 15th centur. You’ll find more about his activities and love affairs. In the morning we’ll have a walking tour of Brasov, which include: Concil Square, Black Church, White and Black Towers, Weaver’s Bastion, Ecaterina’s Gate, etc.
Then we’ll drive out of Brasov on the way to Rupea fortress, an impressive citadel which had the role to protect the villages in the area. The three lines of fortifications made form this place one of the strongest fortresses from Transylvania.
The afternoon is dedicated to explore the medieval town of Sighisoara, an amazing place which preserved very well the medieval houses and town aspect. Sighisoara is highly connected with our Dracula tour because here was born Vlad Dracula in a Middle Age Inn which nowadays is a restaurant called House of Dracula. Enjoy a walk on the narrow river stones paved streets and visit the town’s best sights: Clock Tower, Church on the Hill, Tinsmith’s Tower, Church of the Monastery, etc. Sighisoara’s Old Town is included in the UNESCO World Heritages List.
Return to Brasov. Our route will cross beautiful Saxon villages and beautiful hills and woods. One can admire the fortified churches from Rotbav, Feldioara or Saschiz.
Accommodation at: Bella Muzica Hotel***, located in the old town, or similar.

Breakfast. First stop at Sinaia and visit the Peles Castle,  former summer residence of the Romanian kings. It is a great palace which impress with his architecture, amazing wooden decorations, furniture, king Carol I weapons collections, stained glass windows.
Next we’ll stop at Snagov monastery, located on an island in the middle of Snagov lake. The present church holds the tomb of Vlad Dracula. He and his family donated money to the monastery and he built a fortification system around it. The first church was destroyed by the Turks in 15th century. Visiting the tomb of Dracula is a great end of our trip and another chance to find more about his mysterious death.
.Drop off at Bucharest International Airport (estimated time 2.30-3.00 PM) or at another location from Bucharest. For extra services in Bucharest please check the Bucharest optional services or send us your request.

Customize your Dracula tour in Transylvania

All our private tours in Transylvania can be customized as you wish if you have special requirements. We can change the tour length, starting / ending city, tour itinerary, hotel category, etc. Please send us the changes you want to make and we’ll remake our offer accordingly. Please send your inquiry for a tailor made tour in Romania.

If you are interested in Dracula’s story and legend we are inviting you to have a short Dracula tour in Transylvania following the history, life and legend of the famous Vlad Dracula. Our 3 days trip will start in Bucharest, the capital of Romania and will include the most important sights which have a connection with the life of Vlad the Impaler. Your tour guide will tell you what it is true and what is fiction in all this story. In the first day we’ll visit the ruins of Poienari castle, the true castle built by Vlad Dracula, the Curtea de Arges monastery and Princely court. Then we’ll cross the Carpathians mountains on the way to Brasov. Next day we’ll have a tour to Dracula’s castle – Bran castle, than a walking tour of Sighisoara – the birthplace of Vlad. We’ll also visit the Old Town of Brasov, the town where Vlad use to live for couple years.
In the last day of our Dracula tour will visit Peles castle, former royal residence and we’ll end the tour with Dracula’s tomb, located in the Snagov monastery, outside of Bucharest. Book our private guided Dracula tour for a quick introduction in the legend of this famous ruler.