The Palace of Parliament, The Athenaeum, The Royal Palace, The National Art Gallery, The Stavropoleos Church, The old downtown 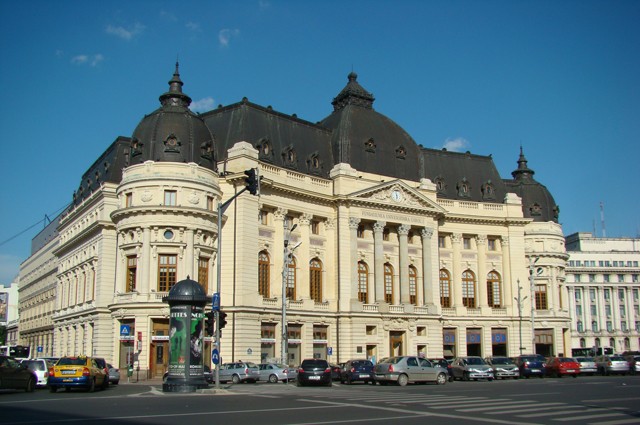 First of all, you arrive in Revolution Square and near the statue of King Carol I riding a horse. In front of it, you will find The Royal Palace built on this site, where stood the house of the Grand  Chancellor Dinicu Golescu. After the union of Moldova and Romanian Country, it was the residence of Prince Alexandru Ioan Cuza. Rebuilt between 1930 -1937 it became the royal palace. This was the place where Romania took the decision to change sides in World War II turning their weapons against the Germans, in 1944 and where in 1947, on December 31st the King Mihai I was forced to abdicate and the communist regime proclaimed The Peoples Republic.

Behind it, is The Library of the University and a little bit to the right, The Romanian Athenaeum, having a round shape, was built by public subscription, in neoclassical style, with concert and lecture halls. On the left side of the statue is the monument for the heroes from the 1989 Revolution and near it a massive building with three black doors and a small balcony above, from where Nicolae Ceausescu spoke to the people.

On the other side of the street stands Kretzulescu Church which was moved from its place about 12 meters on the south to avoid being observed by Nicolae Ceausescu from his balcony during his speeches. Then continuing along the Boulevard Victoria you’ll pass the Ramada Hotel while on the left will appear Capsa Hotel, the place where the writers, painters, and artists from the period of the years 1870-1940 met. Progressing on the same left side, you will discover Lipscani street. It leads from the old Bucharest close beside the Old Royal Court. On the street, you can find now some places where the foundations of the old houses and inns or even old streets were exposed to the public.

If you continue on the streets always keeping parallel to the Victoria Boulevard you arrive at the Stavropoleos Church and to Carul cu Bere an old and famous restaurant in Bucharest, and to the old royal Court and Church. Close to it is situated Manuc’s Inn another very famous Inn in Bucharest. Stavropoleos Church, it was reopened as a monastery but on April 1, 2008, 120 years afterward, it was closed as a convent. The abbot Ioanichie, built an inn and in the year 1724 also the Stavropoleos church and near it the rooms for the monks. In 1733 the monastery took its final shape. The paintings and stone decorations are the same as today.  At the beginning of the XX-th century, some old buildings were replaced and those completed being the bell tower and the buildings which are today the main office, the rooms for the nuns, the library and the refectory. All Stavropoleos belongs in style, to the post Brancovenesc era and shows a mixing together of the oriental tradition with the occidental influences of the time.

Arriving at the River Dambovita which crosses Bucharest and going against the stream you’ll see in about 10 – 15 minutes on the left side, the imposing silhouette of The Parliament, the second-largest administrative building in the world in dimensions after the U.S. Pentagon. The building began in 1984, on a site where old districts of the city were demolished. Its dimensions are 270 m. long, 240 m. wide and 84 m. (275 ft) tall. It is entirely of Romanian manufacture: decorated with marble from Ruschita, Moneasa, Capriori and Alun, ornaments with gold leaf, paneling of oak, beech, cherry, walnut; curtains and carpets, crystals chandeliers from Medias. Now it is an office building of the state as the Romanian Parliament.

National George Enescu Museum is situated at the entrance to the Victoria Boulevard from Victoria Square. The sumptuous entrance covered by the big canopy in the Art Nouveau style, announces that here the luxury and the refinement from the era met here to build one of the most bright and imposing palaces in Bucharest.
The palace it was built between 1901 -1903 for Gheorghe Grigore Cantacuzino (former mayor of the capital, prime minister, leader of the Conservative Party) and after his death in 1913 the palace was owned by his son and his widow Maria, who after the death of her husband, Mihai Cantacuzino, remarried in 1937 to George Enescu the most important Romanian composer and the violin teacher of the Jewish conductor Yehudi Menuhin.