Târgu Jiu (Romanian pronunciation: [ˌtɨrɡu ˈʒiw]) is the capital of Gorj County in the Oltenia region of Romania. It is situated on the Southern Sub-Carpathians, on the banks of the River Jiu. Eight localities are administered by the city: Bârsești, Drăgoieni, Iezureni, Polata, Preajba Mare, Romanești, Slobozia and Ursați. The city is noted for the Sculptural Ensemble of Constantin Brâncuși.

The Sculptural Ensemble of Constantin Brâncuși 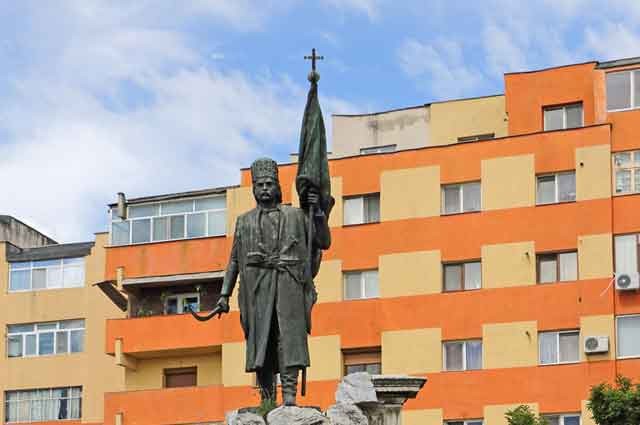 Targu Jiu which lies to the south of the Carpathian Mountains is built on the foundations of a Dacian village surrounded by wild forests. Targu Jiu is situated at the intersection of roads from Danube, Transylvania, and Banat. The Roman Army passed during the wars to conquer Dacia. Later on, during the Middle Ages, it became a main commercial center. The city takes its name from the Jiu River, which flows through it between the Carpathians and the Danube. Targu Jiu has Romanian-style architecture with Oriental and French and German Renaissance influences.

The city takes its name from the river Jiu, which runs through it. In antiquity, there was a Dacian village around the location of today's city surrounded by forests. After the Roman conquests of Oltenia (101-102), military units were stationed around the roads that connected different important routes at the time. During the digging of the Târgu Jiu - Rovinari railroad, mosaics, coins, ceramics, and Roman bricks were found in the south-eastern part of the city.

This and ancient testimonies support the idea that Târgu Jiu was a commercial town (a vicus) while under the Roman Empire's rule. A very important route that connects the Danube to Transylvania runs through the city, so historians believe that part of the Roman army under Trajan's leadership stayed and then passed in the actual location of the city.

After the 271 withdrawal of the Roman army, the city remained in the Latin influence zone, mainly because of Constantine The Great's involvement in Oltenia which he sought to bring under imperial rule. The importance of keeping this zone under Rome's control was underlined by Constantine's decision to build a second bridge over the Danube between today's Corabia (then Sucidava) and the Bulgarian city of Gigen. It was over 2400 meters long, one of the longest of all time.

This territory was under Litovoi's rule, a Vlach (Romanian) voivode in the 13th century, whose territory comprised northern Oltenia. He is mentioned for the first time in a diploma issued by king Béla IV of Hungary (1235–1270) on 2 July 1247. In 1277 (or between 1277 and 1280), Litovoi was at war with the Hungarians over lands King Ladislaus IV of Hungary (1272–1290) claimed for the crown, but for which Litovoi refused to pay tribute. Litovoi was killed in battle. The first written account of the city appears in a document dating from 23 November 1406 in an order signed by Mircea cel Batran. Since 1497, the city has been the seat of Gorj County.

Constantin Brâncuși, who had lived here as a boy, was commissioned to contribute to a memorial monument to the fighters of World War I, called Calea Eroilor, "Heroes' Street", which was finished in 1938. His large sculptures are now the main tourist attractions in Târgu Jiu: The Table of Silence, Stool Alley, The Gate of the Kiss, and The Endless Column. The latter is shown in the middle section of the city's coat of arms. In the 1950s the Communist mayor planned to demolish Brâncuși's "bourgeois" art. The plan was not carried out.

Starting in the 1960s, coal surface mining contributed to rapid population growth. Other local industries include wood, machine building, textiles, glassware, and construction materials (cement, bricks, and tiles). In 1992, a university was founded and named after Brâncuși. 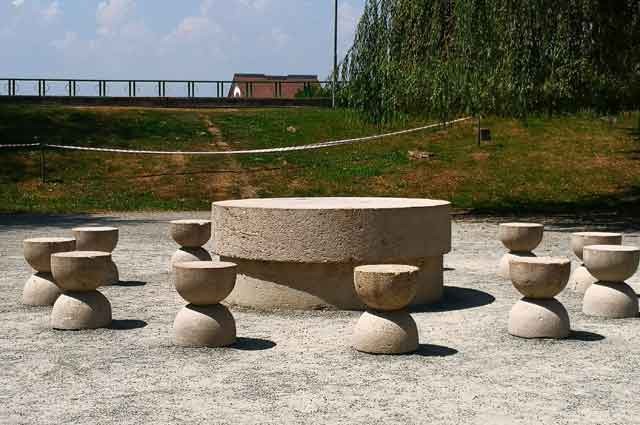 Constantin Brancusi was born in the village of Hobita near Targu Jiu. Several of his most important works such as the Endless Column and the Table of Silence can be seen in the town.

Constantin Brancusi was one of the most important sculptors of the XXth century. His works updated the expression of sculpture and are displayed in museums all over the world. Brancusi designed and built an open-air monumental ensemble in the center of Targu Hiu in 1938. Three monumental sculptures - The Table of Silence, The Gate of the Kiss, and The Endless Column - can be seen on Calea Eroilor (the Heroes Street) an alley of more than one kilometer.

The Table of Silence symbolizes the meeting of the future heroes before the battle and the 12 chairs around it are in form of clepsydras.

The Gate of Kiss moves you through to another life, but the sculpture is also a symbol of marriage.

The most important piece of the ensemble is the Endless Column, almost 30 meters high, which is a tribute to the Romanians that died fighting in the Great War and is a representation of the funeral pillars used in Southern Romania.

Mihai Radu, a Romanian architect based in New York, described Târgu Jiu's downtown - rebuilt during the Communist era - as little more than "a mix of poorly maintained paving, disheveled mass housing, jumbled signage and buildings of every size and description". The overall cityscape is "mundane, but vibrant and no doubt livable", with "often dissonant" street pattern and urban fabric. Representing the interior space of Brâncuși's ensemble, the Calea Eroilor - otherwise, an unprepossessing, uninspiring, and "unacceptably vernacular" street - defines through his sculptures the town's civic areas in the same manner as the Great Axis of Paris.

Brâncuși's work in Târgu Jiu is “absolutely revolutionary”: the sculptures exist at the same time as conventional public art with multiple meanings and as functional structures (seats, gateway, monumental marker). Most importantly for Târgu Jiu's urban design, they shape a larger urban structure, being spatially integrated with the town's urbanism in a dramatic and fundamental way. One's progression through the entire ensemble is a spatial experience rare in any modern-day city. The sculptures peacefully coexist with and transcend their mundane context.

Through Brâncuși's work, East and West come together in Târgu Jiu in a “completely unique” way. The town's imperfections reinforce his ensemble's place in the "messy" cityscape and its history. Juxtaposed against the city's messy urbanism, Brâncuși's ensemble is pluralist urbanism in its finest form. Civic in every way, his ensemble is closely integrated with Târgu Jiu's everyday life. A small-town Romanian fabric merged with a sculptural ensemble of world significance makes Târgu Jiu's plural urbanism astonishing.

Coat of arms
The Coat of Arms of Târgu Jiu consists of a Shield with seven towers. In the center of the Shield lies the representation of Constantin Brâncuși's Endless Column, a symbol of Romanian art and culture. In the right and left sides of the shield lies a golden lion holding a black sword, "guarding" the Column. The Lion is the ancient symbol of Oltenia, thought to be originating from the logo of one of Rome's Legions station in this area, the 13th Legion "Gemina (Legio XIII Gemina)". It represents the bravery and combative spirit of the city's inhabitants.